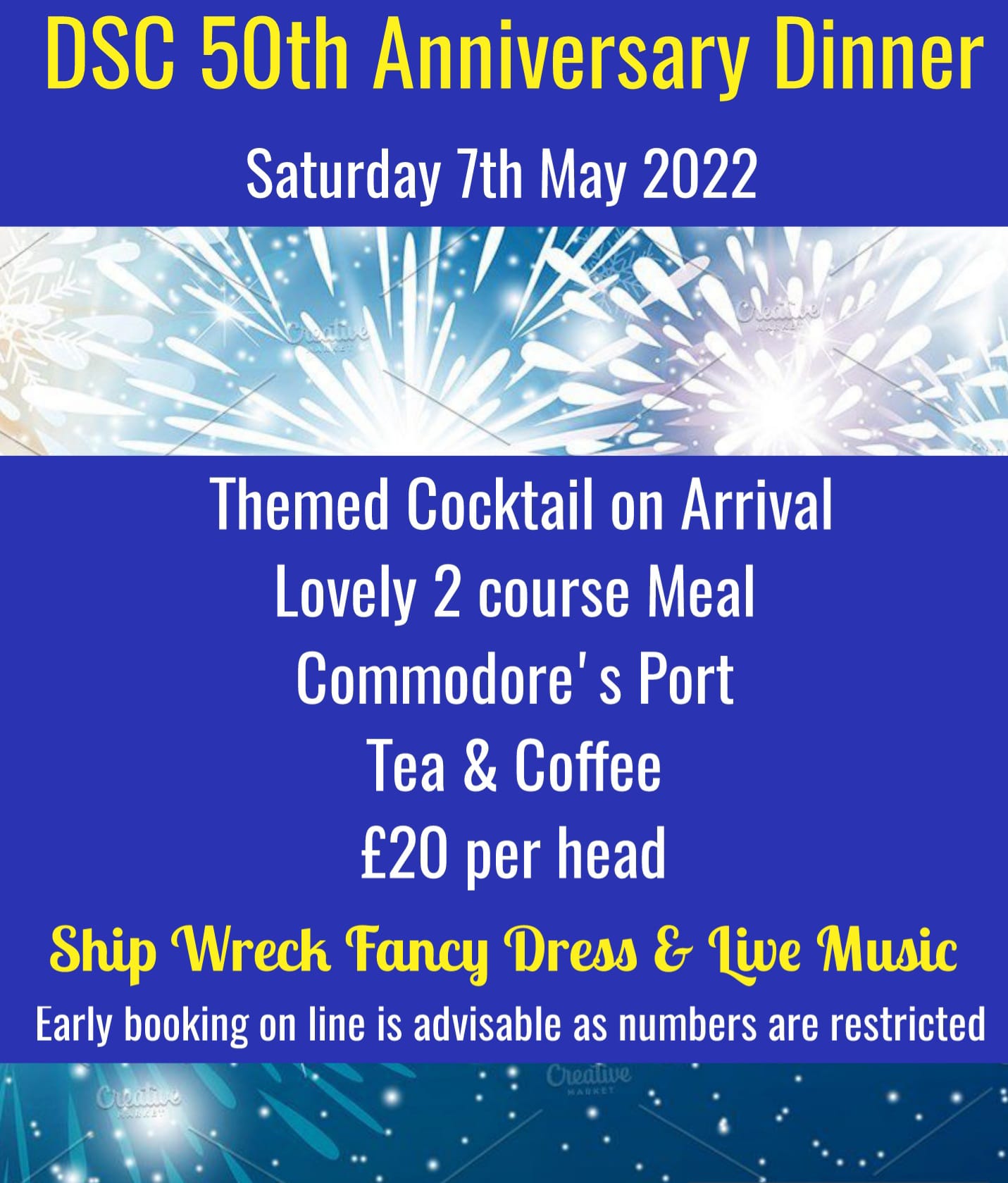 So Donaghadee Sailing Club is 51 years old in it’s current form, starting off with a few meetings in a private dwelling house & later a pub in the town many years ago!

Many thanks to our like minded founder members for having the foresight to start a sailing club back up and build it up from basically nothing – look how it’s evolved!

As part of our celebrations we’re having a ‘Shipwrecked’ fancy dress party in the Club on Saturday 3rd September – some of our founding members joining us as special invited guests. So get those fancy dress costumes out from their slumber and ready to go!

“ We’ve been jolly sailors now for 50 years and more”

To celebrate 50 years of Donaghadee Sailing Club going forward , Jaunty Angle  writes — “Hanging on a wall in our wonderful new Clubhouse is a copy of the record of the first meeting when the present Sailing Club was established. That meeting took place in a dwelling house, No. 25, The Parade on 2 December 1970 when it was proposed “to form a Club for the promotion of sailing”. It must have been a tight fit for the 17 people in attendance. Two dates were set for further meetings later that month and so the Club began life 50 years ago. The meeting adjourned – to Sam McCrory’s  Port ‘O’Call  if truth be told.

Beside that framed record is another copy of an interesting letter addressed to HC Kelly and dated 15 February 1902 – some 68 years earlier – echoing a previous Club of the same name. The sender, a Charles G Jeffers intimated that a number of yachts from North Wales and Lancashire would visit Belfast Lough for Regattas and asked for races to be organised to suit– presumably by the Donaghadee Sailing Club of that era. Clearly, the Liverpool Boat wasn’t the first to make the crossing!  In between times and still in the memory of few of us, Donaghadee had it’s Yacht Club  located at Dorman’s Isle just across from the Railway Station and the carpet factory – arguably the first Club in Ireland to organise a Boat Show held in the Orange Hall in 1962 –but more of sailing history ,and previous clubs and characters  in the town, another time.

For a while DSC was an itinerant Club moving from place to place always on the lookout for a suitable home. From the back hall of the Old Griddle in Bow Street to Sam Hills in Bridge St., now stacked with tyres by Wells, we moved from pillar to post until out of the blue the opportunity to acquire Haisley’s house and the adjacent cottages on Sandy Row – or Shore Street as it is now known. Truthfully, it was a piece of good fortune and the Club’s band of volunteers honed their skills in the art of fundraising to meet the asking price and the building was ours. Amongst my reams of papers I recently came across a sketch of the building the Club proposed to construct on the site. But it never made it from paper to bricks and mortar and instead the existing 2 story building underwent a complete gutting and rebuild to provide us with our home for close to 30 years thereafter.

The Official Opening took place on a beautiful, calm sunny Friday evening in June 1981 followed the next day by our Annual Regatta. It was also sunny but blowing hard from the North. It was then that the consequential benefit of our “super” foundation proved its worth as a sun trap for the shore bound sailors to watch the one brave soul who ventured out in the brisk wind.

Around the same time the Club utilised the virtually derelict site, left after the demolition of the Baths Hotel, for the storage of the growing fleet of Mirror dinghies – the Clubs foundation class that is still a feature today as numbers revive. More red sails in the sunset we expect.  Further dinghy classes emerged as the Club developed – GP 14s, Enterprises, Miracles and Maruders – the latter a fast trapeze dinghy all featured. Some classes endure while other have but brief glory then fade from all but memory and photo. As traditional wood construction has given way to more modern materials so new dinghy classes emerged along with an increase in single handed sailing. But you have no one for company in a single hander and it is interesting to note the tendency in the newest generation of sailors to revert to a more social dimension in their sailing. Long may it continue.  So you will see nowadays the predominance of Topper and Laser classes racing together with the Club’s fleet of Pico’s which are specifically for training newcomers to the sport. In that unchanging edifice that is Donaghadee Harbour, were to be found the keelboat class, namely the Flying Fifteen – having once owned and raced one of wooden construction, they are well named but a little more stable and forgiving than your typical skittish dinghy. These alas have all but disappeared now too, being replaced with a tidy little row of Hunter 19’s. This class represents the progression by members to bigger craft but  while the well known limitations of the harbour are allowed to continue, those with ambitions for cruising tend to prefer the safety of marinas here or elsewhere.

Sunday sailing was another innovation the Club introduced some 50 years ago and the Club still races on both Sunday and Wednesday in the season with the ever popular ‘Come and Try it’ sessions now going by the name of RYA OnBoard and Bright Night Sailing on a Friday evening now an established feature, hopefully being unrestricted this tear and back to it’s former popularity. And we are now venturing into sailing ever later in the season easily possible now with all the facilities in our new Clubhouse. We are growing steadily and progressing. If I was to list my personal pluses that have come in the wake of our new development, it would certainly include a greater involvement of and with the local community and the achievement of training youngsters to a level of sailing that has caught the attention of the regional organisers to such an extent that the Club is represented by lots of our Junior members at regional Performance Squads, RYA youth forum’s, and on the Irish, British, and further afield European stages at ­­­­­­­­­­­­­­­­­­­­­­­championship sailing events

One question I never hear uttered now is “where is Donaghadee Sailing Club?” The new building is prominent on the shoreline and has all the amenities you could wish for – including the best views on the coast. But it is deceptive too – like the Tardis – so the best thing for you to do is come and visit us. You are welcome anytime but as you may already know, the Club is organising a celebration of it’s 50 years with several special events, a formal meal, an open day and exhibition of photos and memorabilia , and a special regatta“